Other than this Baking soda has also some other benefits such as…Teeth whitener, musty odor neutralizer, washing things, and many more. This is why you can say that baking soda is one of the most important elements of a home.

More ever Baking soda will offer you an excellent level of versatility. By sprinkling over everything where you feel high humidity or a musty odor, you can easily eliminate the bad odor along with the high humidity.

Well if you are interested to know more in detail then you should just keep reading this article since here I shared everything you should know about along with its benefits.

What is Baking Soda? Baking Soda(Sodium bicarbonate) is an alkaline white powder, which was made in Dwight’s kitchen, and was called Arm & Hammer Church & Co’s bicarbonate of soda.

Fact: It is a crystalline salt that contains sodium ions and bicarbonate ions.

By 1860, Arm & Hammer wanted to show the population just how versatile the ingredient was, so they started distributing mini-cookbooks, with recipes for bread, cakes, cookies, puddings, and more — some of which were family recipes.

After some years people started using it in their refrigerators to keep things fresh. Later on, it was also discovered that baking soda is also one of the best solutions against high humidity in rooms, kitchens, bathrooms, and other places. As I said earlier, Baking soda is a natural absorbent, and it works by pulling moisture out of the air and into the powder.

This is also a reason why baking soda is often used in dehumidifiers and why you might see a warning on some baking soda products to keep them dry.

Just in case, If the baking soda gets wet then it will start absorbing moisture from the air around it, and as a result, it to clump together or even dissolve completely.

How to use baking soda to absorb moisture First, take a large container or a bowl to fit the item that you want to protect from moisture.

Second, After measuring the place and container size place the baking Soda in the container or bowl.

Third, Just place the container in the place that you wanna protect it, and close the container or cover the bowl with plastic wrap or aluminum foil secured with a rubber band.

Fourth, Just let the container there for around 24 hours or up to 48 hours if necessary to see the difference/result.

Note: Sometimes you may have to do the same process repeatedly so don’t worry about it.

Btw baking soda can also be used as a cleaner, such as countertops and tiles. All you have to do is sprinkle baking soda on the surface and then rub it with a sponge or cloth.

Basically, with the help of a baking soda you can easily remove dirt and bacteria, leaving the surface sparkling clean. Even Baking soda can be used as an ingredient in some recipes, like pancakes and muffins, to give them a light texture.

A musty odor can create some awkward situations in your home and other than room spray, you can use baking soda to absorb and reduce odors. All you have to do is put it into a bowl and place it in the target place.

However, for serious and big places like the basement and big bathrooms, you may have to place them in different places to cover the whole area. Wherever you are placing it, you need to stir the powder to increase the surface area for better performance.

The baking soda not only absorbs moisture, but it’ll also absorb any nasty odors. As it soaks up moisture, baking soda cakes up, making it easy to remove after the fact – just go over your carpet with a vacuum once it’s dry and you’re set.

Q: How long does it take baking soda to absorb moisture?

Well, it does! Baking soda is effective in drying wet carpets because it removes moisture. Sprinkling it over the carpet and allowing it to sit for a minimum of 30 minutes will deodorize and dry up your carpet.

Q: Are there any risks associated with using baking soda to absorb moisture?

Yes! You may face some risks associated with using baking soda to absorb moisture if you didn’t use it in a well-ventilated area since it can cause respiratory problems. Baking soda can also be harmful if ingested in large quantities. 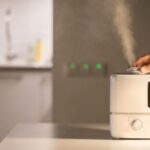 Why does my Dehumidifier Ice up (How to fix it) 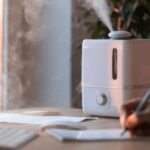 Do Dehumidifiers have Freon?

Techootech.com is a participant in the Amazon LLC Associates Program, an affiliate advertising program designed to provide a means for sites to earn advertising fees by advertising and linking to amazon.com